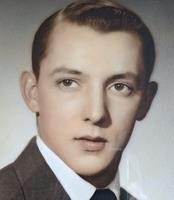 Philip L. Satterlee 1937—2020
Philip L. Satterlee, 83, of Rockford, passed away peacefully on Wednesday, November 25, 2020. His children, Jim and Sharon were there to provide loving care to him until the very end. Phil was born in Gratiot, WI, son of Arthur and Harriet (Burmeister) Satterlee. He graduated from Gratiot High School. Phil went to work for Illinois Bell Telephone in Rockford, IL. He joined the military and served two years in Germany. After returning to work at Illinois Bell Telephone, Phil was then transferred from Rockford to Springfield, IL as a service manager for AT&T Information. He retired from AT&T Information Systems in 1989. Phil then returned to Rockford in 1998 to be with his family and friends. He was an avid Chicago Cubs and Bears fan. He married Joan Hanouw on April 23, 1960 in Earlville, IL. She passed away March 29, 2016. Phil is survived by his children, Jim (Dawn) Satterlee and Sharon (Gary) Robb; grandchildren, Jake Rohloff, Sam (Paige) Rohloff, Ryan (Lindsey) Satterlee, Chelsea (A.J.) LeDoux, Brianna, Ethan and Casey Robb; two great-grandchildren; sister, Beverly Dougherty; brother, Robert (Ilona) Satterlee and many nieces and nephews. He is predeceased by his parents; wife, Joan; daughter, Jacqueline and brothers, Fr. John and Paul Satterlee. Cremation rites will be accorded. Final resting place will be in Arlington Memorial Park, Rockford, IL. Donations in Phil’s honor may be made to a Rockford food bank to help those through the pandemic of COVID-19. A special thank you to Northern Illinois Hospice. Arrangements entrusted to Fitzgerald Funeral Home & Crematory. Share online memories and condolences at www.fitzgeraldfh.com
Source: Published in Rockford Register Star from Dec. 2 to Dec. 4, 2020, as found on Legacy.com.