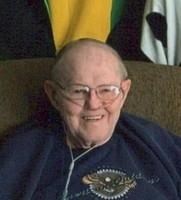 Richard Francis Balentyne Sr. 1929—2020
Richard Francis Balentyne Sr., 91, of Belvidere, IL passed away at his home on Sunday, November 29, 2020. Son of the late Harry F. and Lydia (Dralle) Balentyne, he was born on Monday, June 3, 1929 in Belvidere, IL. Richard served his country during the Korean Conflict in The United States Army Military Police. He married the love of his life, Beverly Dolphin, on Sunday, June 14, 1953 at St. James Catholic Church in Belvidere, IL. Richard worked for Barber Coleman as an assembler for 47 years. He was very active at St. James Catholic Church in Belvidere. He was an altar server, usher, and a Eucharistic Minister. He was a member of the VFW and American Legion, and volunteered at the Keen Age Center, Chamber of Commerce, Conservation District, and St. James Catholic Church. Richard is loved and will be deeply missed by his beloved wife, Beverly; daughter, Anne (Thomas) Wise; grandchildren, Amanda Wise, Jonathan Wise; brother, Kenneth (Patricia) Balentyne; sisters in law, Juanita Balentyne, Sonja Balentyne; The Stark Family; and numerous nieces and nephews. He was preceded in death by his parents, Harry and Lydia; son, Rich Balentyne; 6 infant children; brothers, Harry I. Balentyne, Gerald Balentyne, Emmett J. Balentyne; sister, Phyllis Blake. There will be a visitation on Monday, December 7, 2020 from 10:00 A.M. to 10:45 A.M. at Belvidere Funeral Home & Cremation Service in Belvidere, IL. A Mass of Christian Burial will begin at 11:00 A.M. at St. James Catholic Church. Interment will follow mass at St. James Catholic Cemetery. A memorial fund has been established in the family’s name.
Source: Published in Rockford Register Star from Dec. 4 to Dec. 6, 2020, as found on Legacy.com.