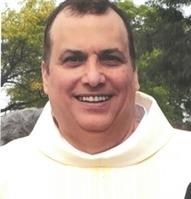 Deacon Frank Licari Zammuto, 60, of Rockford passed away suddenly at OSF St. Anthony Medical Center on January 6, 2021.
Born September 20, 1960, in Rockford, the beloved son of Peter J. and Carmella (Licari) Zammuto. Frank graduated from Boylan Catholic High School in 1979. He went on to college and graduated from Northern Illinois University with a Bachelor of Science in Biology and received a Master’s degree in Molecular Biology from the University of California, Los Angeles. After graduating he went on to be a Research Associate for UCLA Health Laboratory.

In 1997, he moved home to Rockford and worked as IT Director for Nicolosi & Associates and then for Giovanni’s Inc. In 2005 he started working for MICROS Systems as a Senior Consultant and in 2010 became a Product Manager and eventually a Senior Solutions Engineer for Oracle Corporation.

Frank was a practicing Catholic and highly active in his faith. He had a passion for bringing people into the Church and was a vessel of God’s love for many. Over the years he taught and directed the Rite of Christian Initiation for Adults program at St. Anthony of Padua & Holy Family parishes. After discerning for many years, he was called to a greater service in the Catholic Church and was ordained a deacon in the Rockford Diocese on September 24, 2016.

Frank understood being called by God and saw the diaconate as his true vocation. He was a servant leader who was humble, genuine, and kind. He had a gift- the ability to set anyone at ease and feel comfortable. As an ordained minister, Frank gave public witness in the name of the church by following Christ in all areas of his life including his secular occupation but especially with his beloved family. Being a son, brother, uncle, nephew, and cousin gave Frank no greater joy. His love for his family, friends, and the Lord inspired his life. He was a long-time parishioner of Holy Family Parish, Rockford and served as their permanent deacon. He was also an Associate of the School Sisters of St. Francis.