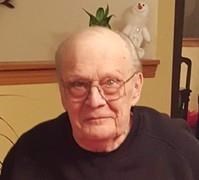 Wayne Francis Stern 1934—2020
Wayne Francis Stern, 86, passed away on Wednesday, December 9, 2020 following a long illness and COVID 19. Son of the late Frank and Gertrude (Ollman) Stern, he was born on Friday, April 20, 1934 at Highland Hospital in Belvidere, IL. Wayne graduated from Belvidere High School in 1952 and Drake University School of Pharmacy. Wayne served his country in the United States Navy as a Corpsman from 1953 to 1957. Wayne married the love of his life, Sandra Didio on Saturday, July 28, 1962 in Belmond, IA. He was the pharmacy manager at Kmart in Belvidere from opening until retirement in 1999. Wayne was a big fan of the Chicago Cubs, Bears, Blackhawks, University of Illinois and Notre Dame. He coached Belvidere Youth Baseball for 12 years, was a Eucharistic Minister, and was a longtime member of Belvidere V.F.W. and American Legion. Wayne is loved and will be deeply missed by his beloved wife, Sandy; sons, Michael Stern, Mark (Kathleen) Stern, John Stern, Jason (Karice) Stern; grandchildren, Colleen Stern, Matthew Stern, Michael Stern, Patrick Stern, Kaitlin Stern, Kyle Stern; numerous nieces and nephews. He was preceded in death by his parents, Frank and Gertrude; sister, Ruth Jacobsen. There will be a graveside service beginning at 11:00 A.M. on Tuesday, December 15, 2020 at Highland Garden of Memories in Belvidere, IL. In lieu of flowers, memorials can be made to Wounded Warrior Project, Gary Sinise Foundation, or Belvidere Youth Baseball.