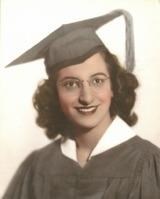 Josephine Lucille “Jo” Morrissey 1926—2021
Josephine Lucille “Jo” (Nana) Morrissey, daughter of Lorenzo and Catherine Matranga, passed away peacefully, Saturday, May 29, surrounded by family, with a Rosary in her hands.
Josephine grew up in an Italian neighborhood in Southwest Rockford. Her father, Lorenzo, emigrated to the United States from Sicily, served in the U.S. Army and later worked at Camp Grant. Her mother, Catherine, was born in Mississippi and moved to Rockford as a child.
Although her family came from modest means, she learned the importance of discipline, frugality, perseverance, and being “rich” in spirit. She was incredibly proud of her Italian heritage, her neighborhood, and her community. She was a staunch advocate and defender of Rockford. Her father was a master gardener, raising incredible fruits and vegetables and making his own wine. Jo’s mother turned grapes into jelly and made awesome sugo (pasta sauce) with fresh tomatoes from their garden. They passed on their faith, values and heritage to their children.
During her high school years, Jo worked in local factories, doing her part as a “Rosie the Riveter” to help the WWII war effort. Her brother, Joe, fought in Europe, including the Battle of the Bulge. Her brother, Cosmo, fought in the Pacific. Her 3 other brothers died by the time they were 3 years old. Josephine was the youngest of the six children. As such, she was the “baby” and family members called her “Babe,” with some nieces and nephews calling her “Aunt Babe.” Grandchildren called her “Nana.”
Her family could not afford a car, so she rode the bus or walked until she was 40 years old when she took driving lessons. She worked hard in school. She dealt with significant prejudices that existed against Italians and women at the time. She did what was needed to contribute to the support of the family.
Josephine’s Catholic Faith was a vital part of her entire life. She was a member of St. Anthony Church where she was baptized, confirmed, and married. She attended West High School. After graduation, Jo entered OSF St. Anthony Nursing School where she became a Registered Nurse. During her nursing career, she worked for St. Anthony’s Hospital and later for Dr. Paul T. Johnson.
Jo was a strong, independent woman, passing those traits on to her children and grandchildren. Prior to getting married, Jo traveled extensively throughout the United States with her girlfriends. Jo even survived a revolution! While vacationing in Cuba, Fidel Castro overthrew the prior government. Not much of a vacation! We thank God that Jo survived!
In 1960, she met a local attorney, Joe Morrissey, at the Saddle and Cycle. While initially turned off by the loud lawyer, she gave Joe a second chance since he had a brother who was a priest, a sister who was a nun and he grew up in a large, Catholic family. Joe was enamored with Josephine’s strength and independence. Her mother’s cooking and dad’s garden were a plus!
For the first 9 years of their marriage, Jo, Joe and their two oldest children lived a few blocks south of St. Anthony’s Church in Rockford in a busy household that included Jo’s parents as well as her brother, Cosmo, sister-in-law, Antoinette, and their 4 kids. There, Jo’s dad, Papa Matranga, taught husband Joe how to garden the Italian way and Joe embraced the many Italian traditions and culture of Southwest Rockford.
In 1969, Jo & Joe moved into a home that they built on Spring Lake, former swamp land in Rockford’s east side. As the kids grew up, the vacant lot to the west of the home was a great location for Wiffle ball, football games and family gatherings. Their garden to the east covered an entire lot and became an abundant source of fresh vegetables for family and friends. Jo was an incredible cook and her family was blessed with her many great dishes, especially during the harvest. She found many creative ways to include giant zucchinis from the garden in a variety of soups, cakes, breads, lasagnas, etc.
As their kids grew up, the Morrissey home seemed continuously filled with friends, cousins, food, and laughter. Outside, animals included frogs, toads, fish, turtles and an occasional leech latched onto one of the kids after playing in the creek. Racoons, muskrats, mink, birds, flowers, and butterflies filled the neighborhood, as well. Josephine was also known to counsel and mend her kids’ friends from time-to-time who sought out their home for comfort and encouragement.
Josephine stayed true to Joe through thick and thin. Joe’s 18 years of active alcoholism blossomed into 39 years of blessed sobriety. During the toughest times, Josephine’s strength and faith held the family together. Josephine was a long time member of the Alano Club and other Al-Anon support groups for relatives of alcoholics.
During their marriage, Jo and Joe took many wonderful vacations and made great friends along the way. They enjoyed cruises, especially to Alaska. They also had great times vacationing in later years at their condo in Siesta Key, Florida. She especially enjoyed walking along the beach at sunset with Joe and family friends.

Josephine worked 16 years as a nurse and many more years as a volunteer. She helped out at Holy Family Parish, Meals on Wheels and St. Anne’s Nursing Home, to name a few. Yet, she was always present for her children and grandchildren and was a passionate advocate for them — whether attending a parent-teacher conference, defending her son Larry on the campaign trail or calling the newspaper to correct a story about one of her grandchildren. She was a constant source of encouragement to her kids and grandkids. She would say, “You can do it!” and she was always there to lend her love and support.

During the Pandemic, Jo lived with her daughter, Eileen, and son-in-law, Joe, at their home. Nana was blessed to receive the best possible love and care from Eileen, who kept her healthy and safe. Nana also had great pals in Eileen’s dogs, Rocky, Coco, and Skipper, who loved and supported Nana as part of their “pack”. Rocky was especially close, spending each night snuggled up with Nana as she slept. Rocky continued to comfort Nana into her final hours, nestling with her in bed.

Nana had an incredible caregiver, Deborah, who is also a great friend. Nana and Deborah made meals together and worked on projects. They made recipe books which Nana gave to her family. They even began making cookies for the firefighters at each of the Rockford fire stations. Nana was so proud of the work and assistance the paramedics had given her and her family over the years.

In recent weeks, with the help of Eileen and Deborah, Nana was able to return to her own home. Nana had a favorite spot in her living room where she could look at Spring Lake and enjoy the ducks, geese, birds, butterflies and sounds and sights of nature. She called it her “little corner of the world”. She read, prayed and colored many coloring books. Amid a crazy world, here she enjoyed a simple peace. She was content and happy. She was vibrant until the very end.

Prayer was an intimate part of Josephine’s life. She was devoted to her faith, including the Blessed Virgin Mary. Each day concluded with praying the Rosary. She carried this tradition into her final hours, as memories, prayers, and love were shared. Her oldest son, Bill, led a final afternoon prayer session and provided incredible spiritual support and leadership for Nana and our family. As her body was letting go, Nana found comfort through the intercession of the Blessed Mary, holding and praying her Rosary like she had done every evening for years. Her heart stayed strong until its final beat. While it’s so hard to say goodbye, we are comforted by warm memories and the blessed gifts of faith, hope, and love that she gave us. She showed us how to live a vibrant life and to die with faith, dignity, perseverance, and courage.

Visitation will be Friday, June 4, 2021 from 4:00 pm to 7:30 pm at Fitzgerald Funeral Home on Mulford Road. Rosary will be recited at 7:00 pm. Visitation will also take place on Saturday, June 5, from 10 am to 11 am at Holy Family Church with Mass of the Lord’s Resurrection celebrated at 11 am. Burial in Greenwood Cemetery. Please bring a mask or face covering to follow COVID-19 protocol at the Visitation and Mass. Special thanks to Fr. David Beauvais and Fr. Kaim, Pastor of Holy Family Church who provided counsel, comfort, and support.

Source: Published by Rockford Register Star from Jun. 1 to Jun. 4, 2021 and found on Legacy.com.

91, of Rockford, passed away in Provena St. Anne’s. Born April 17, 1915, the son of Tiss and Maria Cason, he married Marguerite Marconi in St. Anthony Church in 1938. Tony and his mother created and founded Maria’s Italian Café and Maria’s frozen foods. He owned The Music Box, Green Gables, Palm gardens, The Airport Restaurant and Nino’s Steakhouse. Tony played the trumpet in the Al’s Iowaianes Band and also for special services in the army, WWII. Member of St. Anthony Church. Predeceased by brother John (Jake), sisters Irene Cherichetti and Inez Vitale.  Arrangements by Gasparini and Oliveri Funeral Home.