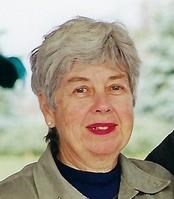 Georganne Hinchliff Eggers 1928—2021
“A Remarkable Woman Leader”
Georganne Hinchliff Eggers, 93, of Rockford, passed away peacefully on Friday, May 28, 2021. She was married 65 years to her dearest childhood friend Gordon, who was described as “a true gentleman.” Together they taught what devotion looks like.
Georganne was one of a kind. When asked what the key to her successful life was, she replied, “being born a happy girl.” Even so, she overcame much adversity, including the death of her father at a young age. She balanced home life raising three children, and being an effective “community giver.” Her priorities were always family, friends, community and church.
Georganne attended Keith School, founded by her great aunt, before graduating from West High School where she later served as chairwoman for multiple reunions. After attending West High School, she volunteered during the polio epidemic and made supplies to support the WW2 war effort. She attended Rockford College and graduated from Skidmore College in Saratoga Springs, NY as class President.
Following the heritage of her mother she was a lifelong volunteer and was a gifted natural leader. Georganne never complained. She just rolled up her sleeves and put her strong work ethic, integrity, and wonderful sense of humor to work. No task was too small or too large for her. She was on the Rockford College Board of Trustees for 25 years and on the Keith School board for an extended period. Since childhood she volunteered at the Goldie Floberg Center, and, following in the footsteps of her mother and mother-in-law, was on its board for decades. Georganne was the first female president of the United Way of Rockford and of the Rockford Community Trust. She was a lifelong member of Second Congregational Church, which her family was instrumental in organizing. She was past president of the Junior League of Rockford, the Rockford Garden Club and the Monday Club of Rockford.
Georganne loved Rockford and was very proud of her family heritage in the area. The community thanked Georganne by bestowing multiple awards on her, notably the Chuck Uram Lifetime Achievement Award, the Rotary “Service Above Self” Award, the Talcott Cross from Rockford College, and being an Excalibur Award finalist. Even in her 90’s, Georganne never stopped looking after others and smiling.
While her community accomplishments were many, her true love was her family. She was a fabulous cook and loved to entertain. Always inclusive, her table always had room for extra friends who might be alone for the holidays. Watching her children, grandchildren and “great grands” grow gave her endless joy. Her smile and positive attitude was the glue that bonded the family. She was a caring friend, volunteer, gardener, philanthropist and mother extraordinaire. She will be missed by all.
Georganne is survived by her sons, Gordon Garrett Eggers, Jr. (Rose) of Rockford, Edward Hinchliff Eggers (Vicki) of Sycamore, IL, and daughter Elizabeth Eggers Lind (Robert) of Winnetka, IL. Eight grandchildren, Jarrett Eggers (Alyssa) of Broomfield, CO, Ross Eggers (Jannet) of Niwot, CO, Hillary Eggers Shedd (Taylor) of Ft. Collins, CO, Jon Lind (Stephanie) of Chicago, Julia Lind of Chicago, Emily Eggers Scott (Taylor) of Ft Collins, CO, Peter Lind (Mary Frazier) of Chicago, and Emerson Eggers of Denver, CO; in addition to seven great grandchildren; Garrett, Maya, Edward, Mackenzie, Gordon, Noelle, Hazel. She was predeceased by her husband, Gordon Garrett Eggers, and brother, Edward Collins Hinchliff.
The family wishes to thank Georganne’s many lifelong friends who loved and supported her and the wonderful Morning Star Village for their care and friendship, especially Chrystal, Georganne’s guardian angel.
A celebration of Georganne’s life is scheduled for 11 A.M. on Thursday, June 10 at the Second Congregational/First Presbyterian Church in Rockford with visitation starting at 9:30 AM. Family prefers memorials may be made to the Goldie Floberg Center (58 W. Rockton Rd, Rockton, IL 61072), Second Congregational/First Presbyterian Church (318 N. Church, Rockford, 61101) and the Natural Land Institute (320 S. 3rd St, Rockford 61104). SecondFirst Zoom is inviting you to a scheduled Zoom meeting. Join Zoom Meeting
https://us02web.zoom.us/j/83473162746?pwd=NXYwVlZaYlN1QUlsaS9MOGZnZjVLUT09Please visit www.olsonfh.com for Covid 19 limitations or to express a condolence.

Source: Published by Rockford Register Star from May 29 to Jun. 6, 2021 and found on Legacy.com.